Keys are a common way of fastening items such as sprockets, pulleys and gearboxes on to cylindrical shafts. A key is defined by being a removable element that is capable of transferring torque between a shaft and a hub. In general, keys are either square or rectangular and are usually parallel/flat, although gib head keys for example utilise a taper.

Sunken keys require keyway grooves in both the shaft and the hub.  Keys are often square or rectangular in cross section, although the rectangular keys offer greater stability when under loads.  This increased stability is due to their wider and lower profile offering better seating in the grooves and increased resistance to the turning moments and shear forces.

Sunken keys can also be tapered, with the key steel driven into a tapered groove within the hub and a parallel groove on the shaft.  The key steel is inserted until it firmly locks, with gib head key steel facilitating easy removal due to its headed design.

Where taper keys lock the hub to the shaft and prevent the hub moving along the shaft’s length, parallel or woodruff keys require a separate locking mechanism such as clamping collars or grub screws.  The main disadvantage with tapered keys is causing a slight eccentricity as all machining clearances are moved to the keyway side.

Woodruff keys are a deep shaft penetration, semi circular key that is generally only suited to low torque applications.

Standard feather keys are machined part way along a shaft and the key steel is rounded on both ends.  The shaft groove is machined with a tight tolerance to the key steel so that the key remains in place, although the key steel can also be bolted into place.  Tolerance is built into the hub, allowing it to slide over the in-situ feather key steel.

Several other feather key types are available and require a keyway groove machined from the shafts end.  These are the peg feather key and the double headed feather key, where the key steel is located by either a peg through the hub or by heads on either end of the key steel which fit over both ends of the hub.

For higher torque applications, Kennedy (multiple square keys set at 90 or 120 degrees), Round (lower shear concentration) and Barth (tight fitting and bevelled) keys can be used. 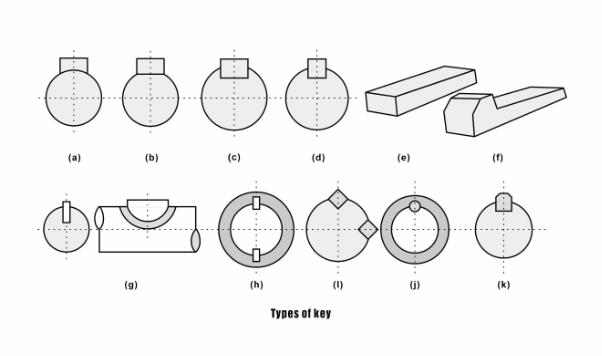 Figure 1 – Types of keys and keyways

Considering how the torque and forces are distributed, the main consideration for failure modes is shear or crushing of the key steel. It should be noted however, that if a shaft also operates in reverse, the negative tolerance used as assembly clearance can cause both impact and fatigue damage to the key steel over time.

For reference, Figure 2 (a) shows the forces acting on the key steel during shear, while Figure 2 (b) illustrates the crushing forces.

As a general rule, the following can be applied when considering the correct key for an application;

Square keys should only be used on shafts up to 22mm. Above 22mm it is recommended to use a rectangular key.

Find the Length and Width of a sunken key, having a depth of 20mm on a 100mm diameter shaft.

The shearing resistance of the key steel is equal to that of the shaft.

The twisting moment / torsional capacity of the shaft based upon the shear strength can be calculated from;

For the torsional capacity of key steel considering crushing;

For a standard design;

For the torsional capacity of the key steel under shearing;

It is also possible to obtain the height (b) from Mt=Mt keyS and would give a result of around 24.5mm

Posted in Technical and General Information